Ashey Hinshaw is an incredibly expressive American actress who pours her heart and soul into each and every role she performs. Since being a breakout star in 2013, Ashley has established herself as one of the most talented actresses in Hollywood with her solid works.

Passionate about acting from a very young age, Ashley is indeed living her childhood dream. Nevertheless, alongside the fulfillment of her dream, Ashley also found the love of her life and her life partner in the same field.

"About Cherry" star Ashley Hinshaw is happily married to her long-time partner Topher Grace (Christopher John Grace). Her husband Topher is also a well-known personality in Hollywood who has been active as an actor since 1998.

Ashley and her boyfriend turned husband Topher began dating in January 2015 and got engaged almost a year later in January 2015. The news of their engagement was official after Ashley was seen showing off her diamond ring on the red carpet on January 10 when the duo attended the Art of Elysium Heaven Gala in Santa Monica, California. Their engagement took place a week prior to the event.

Their sweet love story soon leveled up as the pair decided to tie the wedding knot. Ashley Hinshaw and her partner Topher got married in an intimate wedding ceremony on 29 May 2016 in the Santa Barbara area of California.

StartUp star Ashley and her husband, That ’70s Show star Topher Grace, are parents to 2 kids together. The duo first welcomed their daughter Mabel Jane Grace on 1 November 2017.

They were then blessed with their second child during the Covid quarantine in 2020. They announced the news of their pregnancy while they attended Art of Elysium’s 13th Annual celebration in January 2020. 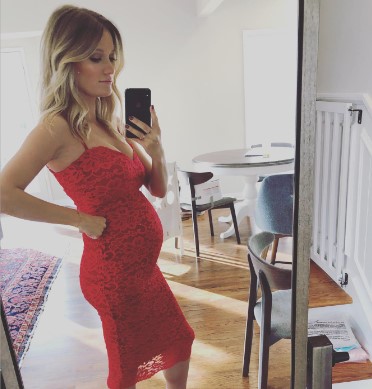 However, the duo is yet to reveal the gender and date of birth of their second baby.

As of now, Ashley and her family of 4 reside in their new house in La Cañada Flintridge which they bought in 2020 after selling their old studio City home for $2.45 million.

The Pyramid actress Ashley Hinshaw was born on 11th December 1988 in La Porte, Indiana, USA. Her dad’s name is Chris Hinshaw and her mom’s name is Craig Hinshaw. Ashley shares a close bond with both her father and mother. Saying so, Ashley is often seen sharing fishing memories with her father, who was a traveling salesman

Ashley has two siblings, a sister named Melissa Hinshaw and an older brother.

Ashley Hinshaw has successfully transitioned from model to actress in her career of more than a decade. Ashley was last seen in the recurring role in the American drama, “The Arrangement.”

As an American actress and model, Ashley Hinshaw’s net worth is estimated to be around $500k.