The Australian actor Adam Demos is best known for the portrayal of Brad Simon in the Netflix series Sex/Life. His appearance in the series not just helped him garner fame but also the love of his life.

Apart from that, he is also known for his performance in Falling in Love, Unreal, and A Perfect Pairing.

Sex/Life was one of the most talked about Netflix series in 2021. Viewers fell in love with the steamy romance between the leads and also got curious about their real-life relationship.

The on-screen pair, who had a lot of intimate scenes in the American series, later became a real-life couple.

Adam and his girlfriend Sarah met on the sets of Sex/Life in the fall of 2020 in Canada and eventually began dating after they hit it off right away.

The duo then started sharing lovely posts for each other on social media which made their followers speculate about their budding romance.

Reportedly, Adam and Sarah were already dating by June 2021. Since then, they have never been reticent in sharing glimpses of their relationship on social media.

The duo even opened up about their relationship in their interviews stating how grateful they feel for having each other in their lives.

Adam and his partner-in-crime have been sharing several pictures of each other on their respective social media handles with lovely captions which shows that they are still going strong and enjoying their love life.

Who Is Adam Demos’ Girlfriend?

Adam Demos’ girlfriend Sarah Shahi is an American actress and former model born on January 10, 1980. You might have seen Sarah in the original version of The L Word where she played the character of Carmen de la Pica Morales. 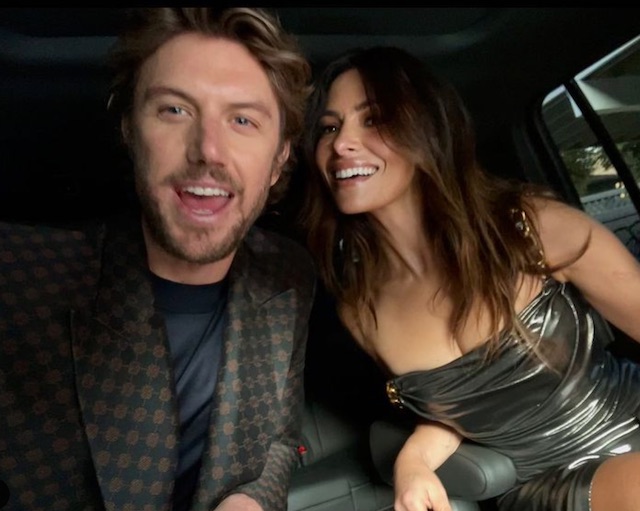 She will soon be seen in the DC film Black Adam as Adrianna Tomaz/Isis alongside Dwayne Johnson.

Before dating Adam, Sarah already had experienced a failed marriage. She was married to actor Steve Howey for more than a decade.

Sarah has three children with her ex-husband. She gave birth to the couple’s first child, a son named William Wolf in 2009. Six years later, they welcomed twins Violet Moon and Knox Blue in March 2015.

She met Steve while filming for Reba in 2004 where she played the role of Kate/Bridget and Steve portrayed Van Montgomery.

After dating for around three years, Sarah and Steve got engaged during a trip to Hawaii in 2007. They got married in Las Vegas in 2009, two years after their engagement.

However, Sarah and Steve’s marital relationship turned sour as time passed so Sarah filed for divorce in May 2020, citing irreconcilable differences.  Their divorce was finalized in January of 2021.

The ex-couple is committed to raising their kids by keeping them away from the limelight despite the separation.

Adam Demos was born to his parents in Wollongong, New South Wales, Australia. His mother’s name is Lindy Demos and his father’s name is not yet known. Reportedly, his father has a demolition company.

There is no information about Adam’s siblings. He is related to Australian basketball player Tyson Demos as both of them are cousins.

His mom is of Greek descent.

Adam Demos has been active in his professional career for around 13 years and has been able to make a place in the entertainment industry with some wonderful portrayals.

Adam’s success from his recent acting credits has helped him assemble a decent net worth. His net worth is now estimated to be in the range of $1 million to $3 million.

The Australian actor Adam Demos was born in 1985 and is currently at the age of 37.

His birthday is on May 24 and his zodiac sign is Gemini.

Adam attended Tarrawanna Public School for his early education and then joined Dapto High School from where he graduated in 2003.

He was interested in acting from a young age and to pursue a career as an actor, he started taking acting classes at Screenwise Film & TV Acting School in Sydney.

Adam initially kept his acting class secret thinking that his friends would mock him.

He began his professional acting career in 2009 by appearing in Home and Away and Rescue: Special Ops.