Luke Mitchell is an Australian actor and model known for his work in various television series. He is best known for portraying the character of Roman Briggs in Blindspot (2016-2020), Lincoln Campbell in Agents of S.H.I.E.L.D. (2015-2016), and Captain John "Abe" Abraham in The Code (2019).

Most recently, he was seen in the 2021 American action thriller film Without Remorse as Rowdy. Luke will be seen in the upcoming American drama television series, The Republic of Sarah, which is set to be released on June 14, 2021.

Yes, Luke Mitchell is married. He got married to his girlfriend, Rebecca Breeds in 2013.

Rebecca is an Australian actress notable for her role in Home and Away. She also appeared in The Originals and Pretty Little Liars. In the year 2021, she plays the character of Clarice Starling in the American psychological horror crime drama, Clarice. 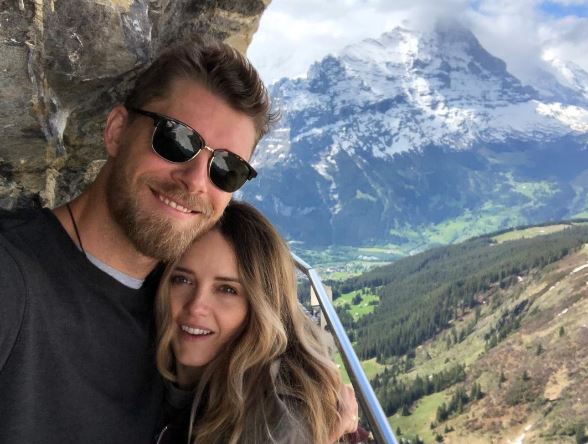 Luke met the love of his life while filming Home and Away in 2009. They were good friends for some time before they officially began dating.

After dating for a couple of years, Luke decided to propose his girlfriend. The duo got engaged during their four-day break on Hayman Island in April 2012.

Eight months after getting engaged, Luke and Rebecca got married in an intimate wedding ceremony on January 5, 2013. They got married in the presence of their close friends and family at the Kangaroo Valley Bush Retreat.

Luke is happily married to his wife for eight years now.

Does He Have Any Children?

No, Luke doesn’t have any children as of May 2021. However, he has a dog in his family whom they treat as their child.

If you have been following Luke or Rebecca on Instagram, you might have seen them sharing their dog’s picture and spending time with him.

What Is Luke Mitchell’s Net Worth?

Even though it hasn’t been long since Luke started his acting career, he has appeared in some of the hit movies and television series. With the rise in his career height, he has been able to gain both popularity and fortune.

The exact value of Luke’s net worth hasn’t been revealed yet; however, he is believed to have a net worth above $3 million in 2021. Likewise, his wife Rebecca Breeds’ net worth is also speculated to be in the millions.

Australian Actor The Republic of Sarah The Code S.H.I.E.L.D Blindspot