As the longtime co-host of the program "Closing Bell" on CNBC, the gorgeous and talented Maria Bartiromo was able to make a name for herself.

After years of hard work, dedication, and contribution to the field of journalism, Maria is now one of the prominent personalities on the Fox Business Network. She is popular for hosting the shows like "Maria Bartiromo's Wall Street" and "Morning with Maria."

Who Is Maria Bartiromo’s Husband?

If you are wondering who Maria Bartiromo is married to, here is the answer to your question.

The television news anchor Maria Bartiromo is married to financier Jonathan Steinberg. Her husband, Jonathan, is the chief executive officer of WisdomTree Investments, a New York-based "ETF" and "ETP" sponsor and asset manager.

Jonathan, age 55, is the son of the billionaire financier and American businessman Saul Steinberg (August 13, 1939 – December 7, 2012) and his first wife Barbara Herzog.

Maria got married to her longtime husband, Jonathan Steinberg, back in the year 1999. The lovebirds tied the wedding knot on June 13 at the bridegroom's father and stepmother Gayfryd Steinberg’s home in Quogue, N.Y.

Maria was 31 years old whereas Jonathan was at the age of 34 when they got married. 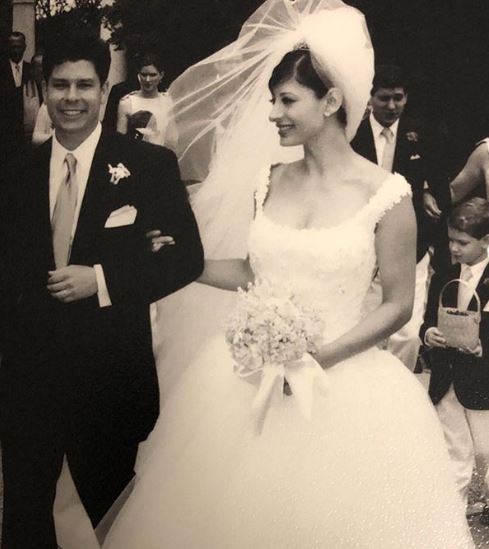 Maria and her husband have been married for 21 years and are blessed to have each other as life partners.

Although Maria gives an insight into her family life only now and then, on 13 June 2020, she shared some throwback pictures from her wedding on their 21st marriage anniversary on Instagram.

Maria and Jonathan, who has been together for more than two decades, doesn’t seem to have children together.

What Is Maria Bartiromo’s Net Worth?

The American news anchor and columnist, Maria Bartiromo, has a huge net worth gathered from her professional career. As a television news anchor, columnist, and wife of financier John Steinberg, her net worth is estimated to be $50 million.

Maria, who is currently working for Fox Business Network, has been active as a journalist for more than three decades. With years of experience and an inclining career graph, Maria has been receiving $10 million as her annual salary.

When Maria was at CNBC, her annual salary peaked at $6 million.

She also owns a beach house in the hamlet of Westhampton, New York with her husband Jonathan.