The American R&B singer Summer Walker has been making headlines because of her personal and professional life. Active in her singing career since 2017, Summer is known for her single “Girls Need Love,” “Playing Games,” “No Love” and many more.

Apart from her musical career, she is also known for her love life and relationships. Recently, she dropped a big bomb on her fans by announcing her pregnancy. Let’s find out more about her love life, pregnancy, and partner.

The R&B singer Summer Walker is pregnant with her second baby. She announced the news of her pregnancy on her Instagram Live after her “Hot Summer Night in LA” concert at Crypto.com.

On June 25, 2022, Summer revealed that she’s expecting her second child by saying,

She further stated that she’s revealing her pregnancy because she felt ‘very disrespected’ during her last pregnancy. She continued,

Summer also has a daughter from her previous relationship. She is a mom to a daughter named Bubbles who was born in March 2021.

Summer Walker is not married as of June 2022. The 26 years old R&B singer also has not been married in the past so she doesn’t have a husband.

Who Is Her Baby Daddy?

Currently unmarried, Summer has been relishing the perks of a romantic relationship with her newfound love interest, LVRD Pharaoh. LVRD Pharaoh is a rapper whose real name is Larry.

Summer is expecting the baby with her boyfriend Larry with whom she has been linked since November 2021. The couple grabbed huge public interest when they tattooed each other’s names on their face and shared the picture on Instagram with the caption, “Bestfriend.” 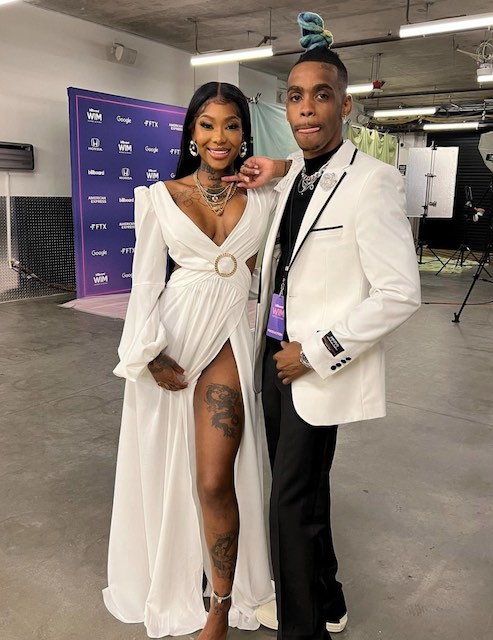 In the Instagram post shared in November 2021, Summer was seen with Larry’s name in the space between her left eye and temple whereas Larry inked “Summer” atop his right eyebrow.

Summer and Larry seem to be madly in love right now. They have shared various pictures and videos of each other which exhibits their chemistry.

Previously, Summer was in a relationship with London On Da Track with whom she has a daughter named Bubbles.

Summer and her ex-boyfriend London On Da Track were in an on-and-off relationship since 2019. The news of their separation came in late October 2021 after Summer revealed that she was officially single on her Instagram stories.

Summer, who will soon be a mother of two children, has also shared pictures with her daughter on her Instagram expressing how special she is. Summer regards her daughter Bubbles as her best friend.

Her Parents And Siblings

Ever since Summer started her professional career as a singer, her personal life hasn’t been kept away from her fans. She has been giving glimpses of her dating life through social media platforms. However, Summer hasn’t revealed any information about her family.

The names of Summer’s parents are not yet known. According to some wiki sites, she has one sibling.

As per Celebrity Net Worth, the American singer and songwriter Summer Walker has an estimated net worth of $4 million.

Before pursuing her career as an artist, she owned a small cleaning business. She also worked as a stripper in an Atlanta strip club.