Rebecca Quick is popular as the co-anchor of Squawk Box. She has been co-anchoring CNBC’s financial news show for more than two decades now.

She is one of the popular CNBC anchors who has been enjoying a prolific career. Along with that, Rebecca is also relishing a blissful family life with her husband and kids.

Who Is Rebecca Quick’s Husband?

Rebecca Quick, who is popular as Becky Quick, has been married to Matt Quayle for more than 10 years.

Her husband Matt is the senior executive producer at CNBC TV. He is also the co-founding producer of Squawk Box and Squawk on the Street.

Matt was honored as a 2020 Business News Visionary for his transformative contributions and innovations off-camera. 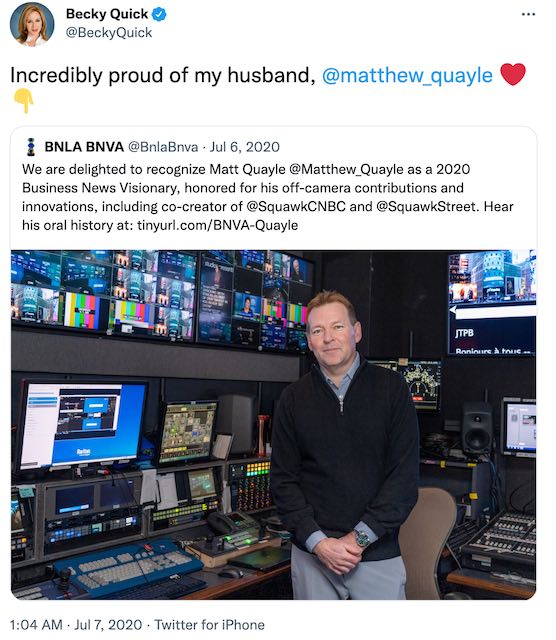 Matt has been working at CNBC since September 1992. He has been associated with the network for 30 years.

He also worked as an adjunct professor at Fairleigh Dickson University from 2011 to January 2018.

Before getting married to Matt, Rebecca was married to Peter Shay. Her ex-husband Peter is a computer programmer. Her wedding date and when she got divorced from Peter are not known.

Matt was also said to be married in the past; however, the name of his ex-wife is not known.

Rebecca and Matt tied the wedding knot in 2008. In between these years, they welcomed two children. They are also parents to Matt’s two children from his previous relationship.

She gave birth to the couple’s first child, a son named Kyle Nathaniel Quayle, on August 16, 2011.

Five years later, she was pregnant with their second baby. She gave birth to their daughter Kaylie Noelle in October 2016.

She is also mom to Matt’s two daughters named Natalie and Kimiko.

Rebecca has shared glimpses of her family life through Twitter. She occasionally tweets about her husband and children.

When Matt was honored with 2020 Business News Visionary, Rebecca, being a proud wife, shared the tweet regarding his achievement.

Back in September 2021, Becky replied to a tweet saying that her kids go to public school.

Currently, Rebecca lives in New Jersey with her loving husband and four children.

What Is Rebecca Quick’s Salary And Net Worth?

Rebecca Quick has been associated with CNBC for 21 years. In between these years, she has garnered both fame and fortune as a CNBC anchor.

Rebecca has been receiving a handsome salary from CNBC. According to Celebrity Net Worth, Rebecca Quick aka Becky Quick has an annual salary of $3 million.

Rebecca Quick was born to a geologist father and a mother who was a teacher by profession. Her father was in the oil industry. He moved to Texas after the oil boom in the 1970s and 1980s.

Becky was raised with three siblings. She was the eldest child and has three younger brothers.