The American actress and singer Idina Menzel is popular as the “Queen of Broadway.” She has garnered huge success in musicals on the Broadway stage.

She is best known for her work in hit musical Wicked in 2003, Disney's musical fantasy Enchanted (2007), voicing Elsa in Disney's animated Frozen franchise, and her first-holiday album, 2014’s Holiday Wishes.

Idina has garnered huge success in her professional career and also was awarded a star on the Hollywood Walk of Fame in 2019.

She is also relishing an enthralling married life with her loving husband along with a successful career. Let’s find out more about her personal life in the content below.

Who Is Idina Menzel’s Current Husband?

Idina Menzel’s husband is Aaron Lohr. She got married to Aaron in a secret wedding ceremony on September 22, 2017.

The couple tied the knot in the backyard of their shared home. She walked down the aisle with her dad and son.

She announced her wedding through a tweet saying that she got married to the love of her life this weekend at her home. She added that her dad and son walked her down the aisle, which was magical. 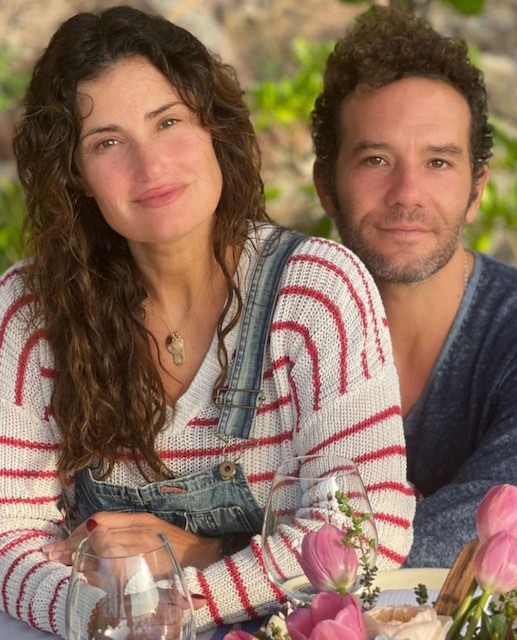 Idina and Aaron have known each other for around 17 years and are enjoying their relationship keeping it private as much as possible.

Her husband Aaron is also in the entertainment world like her. He is known for his work as Mush in Disney’s 1992 film adaptation of Newsies. He is also popular for providing his voice to Dean Portman in the Mighty Ducks and Max Good in A Goofy Movie.

Relationship To Marriage With Aaron Lohr

Idina and her husband are pretty private about their married life but the bonding that they share is no secret.

They even kept their dating life private until April 2015 White House Correspondents’ Association Dinner party where they made the red-carpet appearance as a couple.

Couple of months later, Idina and Aaron bought their house in Encino, California. It was a Mediterranean-style house worth $2. 675 occupying a 4,708-square-feet area with a 5-bed and 6-bath home.

The duo was engaged by 2016. The news of their engagement was made by Idina while thanking her fans for supporting her album Idina in September 2016.

They got married a year later in an intimate ceremony in the presence of their family and some closest friends.

Suggested Read: Who Is Jayma Mays' Husband? Her Married Life, Children, Net Worth

Idina Menzel has been married twice as she was previously bound in a marital relationship with actor Taye Diggs.

Idina and her ex-husband Taye met while working together on the Broadway musical rent in the year 1995.

The estranged pair eventually fell in love and got married after almost eight years of togetherness. Idina and Taye Diggs were married on January 11, 2003.

Well, their relationship lasted for 10 years as they announced their separation in December 2012. Their representative opened up about their split to PEOPLE saying,

“Idina Menzel and Taye Diggs have jointly decided to separate at this time. Their primary focus and concern is for their son. We ask that you respect their privacy during this time.”

Their divorce was finalized a year later in 2014.

While Idina found love again with her then boyfriend Aaron Lohr, Taye moved on by dating Selling Sunset star Amanza Smith. Taye is currently in a relationship with his girlfriend Apryl Jones.

Talking about Idina Menzel’s children, she has a son named Walker Nathaniel Diggs with her ex-husband Taye Diggs.

During an interview with Glamour in 2021, Idina talked about how insecure she felt while turning 50. She said,

"I am ashamed to say it, but I was having a hard time with it. I think it was subconsciously bothering me more than I let on, in regards to my relevance as a performer and actress. I'm feeling like the old lady sometimes, and that's not who I am. I feel very young at heart."

She also revealed how her son comforted her and helped her to change her outlook. According to her, Walker asked her not to look in the mirror and worry about how she looks because she is beautiful.

Her parents’ names are Helen Goldberg and Stuart Mentzel. Her father Stuart was a pajama seller and her mother Helen is a therapist.

When Idina was 3 years old, her family moved to Syosset, New York from New Jersey.

Her parents divorced when she was 15 years old. It was when Idina began singing at weddings.

Idina Menzel is known for hitting big notes on the Broadway stage. She has achieved mainstream success across stage, music, and film which has helped her assemble both fame and fortune.

Similarly, she has amassed a huge net worth as an American actress and singer. As for her net worth, it is estimated to be more than $18 million now.