Luka Sabbat is an American model and cultural influencer who got famous for working with fashion brands and designers like Dolce & Gabbana, Warren Lotas, YEEZY, and Hugo Boss. He is also popular as an influencer on Instagram with whopping 3.4M followers.

According to Luka’s Instagram bio, he is also a creative entrepreneur for Giants Being Lonely, Hot Mess LLC, The Dead Don’t Die, and Grown-ish.

Is Luka Sabbat Married Or Engaged?

Being an influencer, Luka Sabbat is recognized as among the most on-trend in the world right now. His popularity has been increasing day by day and people’s interest in his personal life and relationship status has also been increasing.

Luka is not married as of June 2022. His fans speculated about his marriage when he once shared a picture with his girlfriend mentioning as ‘wifey.’ 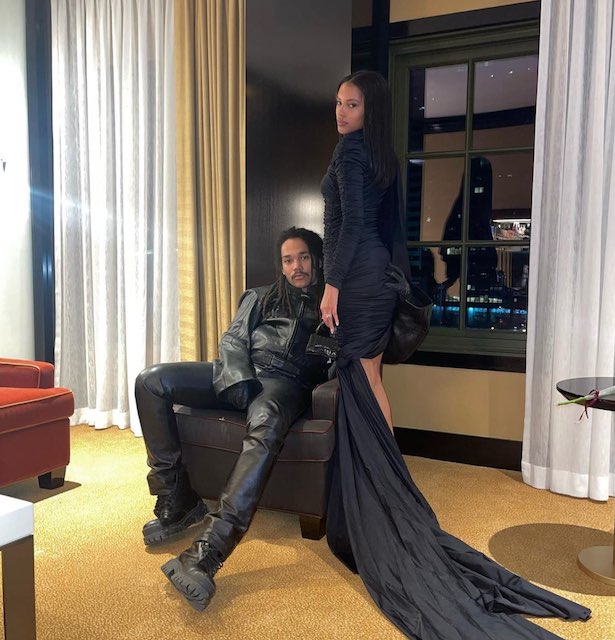 Earlier this year in February, Luka shared a series of pictures with a gorgeous lady on Instagram with the caption, “*insert romantic caption* 🥺🌹❤️ But look at me and wifeys fit thooooo.”

The caption in the post created quite a buzz and people were curious about his love interest.

Luka hasn’t given any hint about his love life and has left his fans guessing. It’s not clear how long the couple has been dating. However, he had shared pictures with his partner in October 2021.

Who Is Luka Sabbat’s Girlfriend?

Luka Sabbat’s girlfriend is Jasmine Daniels. She is an American fashion model who is active on Instagram with the username @jasminenda.

According to her Instagram bio, she is currently signed under Zombie Model Management.

Luka has been linked with several celebrities and models to the day. Previously, he was in a relationship with Simi Khadra. Luka and his ex-girlfriend Simi were even spotted enjoying coffee at Alfred Coffee in West Hollywood in early 2021.

Previously, he was linked with Kourtney Kardashian. He reportedly dated Kourtney briefly in 2018.

The Instagram sensation and rising talent in the fashion industry, Luka Sabbat was born in the year 1997. Luka, who celebrates his birthday on November 26, is currently at the age of 24. His zodiac sign is Sagittarius.

As his parents were in the fashion industry, he was raised between New York and Paris. Luka was exposed to the world of fashion at a young age.

According to his website’s bio, he hated camera and fashion growing up but ended up making his career in the fashion industry, which is ironic. Luka was discovered by Kevin Amato and eventually signed to Request Model Management. He then appeared in Calvin Klein, Hood BY Air campaigns, and Tommy Hilfiger.

Since Luka has been in the industry since a young age, he hasn’t completed his education. He has talked about his education and his high school life in his interviews.

During an interview with Forbes in 2017, Luka said that he attended only one semester before calling it quits. He said,

"I skipped that whole college 'get drunk,' 'get all these girls' attitude; I skipped that and went to work. I got super professional out of nowhere."

“I kind of wanted to go through that phase of doing dumb stuff and going to college and getting wasted, but I do not drink like that or do any drugs. I can still have fun without those things; I can just get a virgin Mojito and be lit. I don't actually need tequila. Looking back it's like "what and how".”

Likewise, during an interview with Complex in November 2016, Luka recalled his high school days stating he was “always the class clown who liked to make people laugh in a real setting, with just talking.”

Since starting his professional career, Luka has appeared in several modeling campaigns. He has also appeared in Kanye's Yeezy Season 1 Presentation at NYFW as one of the male models in 2015.

Luka Sabbat was born to Clark Sabbat and his wife Jessica Romer. Born to parents who belonged to the fashion industry has helped Luka to understand the business at an early age.

His mother Jessica was a fashion stylist for Galliano and Dior so Luka has spent much of his childhood in Paris. She was also a model booker before becoming a chef. Jessica also worked at a fashion show production company Bureau Betak as an assistant.

Talking about his father Clark Sabbat, he is a well-known designer who combines traditional fashion skills with 21st-century technology. Clark has been working as the Design and Creative Director at Clark Sabbat since 2013.

Raised by fashion enthusiasts, Luka could quickly make a name for himself in the fashion industry with his Internet fame and fashion sense.

He has grabbed huge fame from his career and also has assembled an amazing net worth. Well, the exact value of Luka Sabbat’s net worth hasn’t been revealed yet. However, his net worth in 2022 is estimated to be in the range of $1 million to $5 million.