Ricky Norwood is a British actor who rose to fame after playing the role of Fatboy in  BBC soap opera EastEnders and its online spin-off EastEnders: E20. Ricky, who played the character for five years in the soap opera, is also the runner-up of Celebrity Big Brother 2016.

Best known as Arthur “Fatboy” Chubb, Ricky has bagged various awards and nominations for the role; however, his reputation was badly damaged by the webcam scandal. But where is the actor now? Is he married? Let’s find out!

If you have followed the journey of British actor Ricky Norwood all the way from his acting to his journey in the reality game show Celebrity Big Brother, then you may have come into acquaintance with his mysterious lady love.

While Ricky was in the interview with Emma Willis, somewhere in between the audience sat Ricky’s lady love carried away by the emotions. She struggled to contain her emotions as she watched her partner, Ricky after weeks of separation due to Celebrity Big Brother. Ricky then embraced to kiss and hug his mysterious girlfriend which left fans in aww.

Although fans became part of the delightful moment of the duo being back in each other’s arms, neither Ricky nor his girlfriend spilled how they met or how long they have been together. 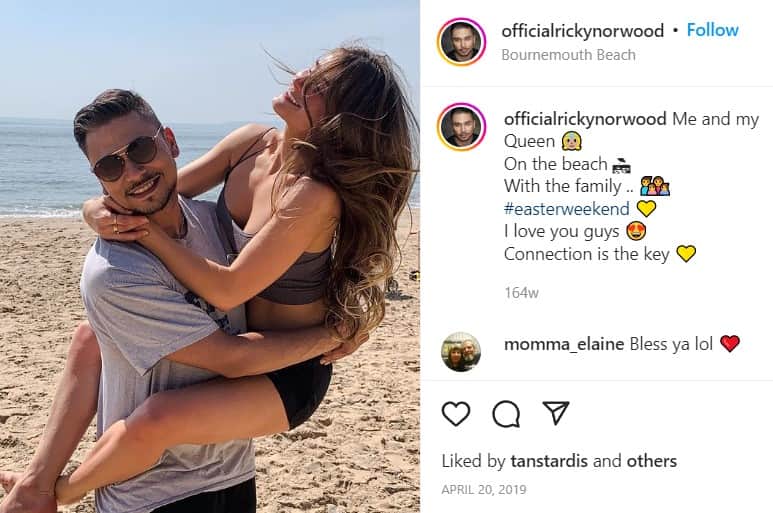 Ricky and his mysterious partner are yet to be married but they are still together. The name and the whereabouts of his girlfriend are hard to be gathered as she has concealed her personal details and is not active on any social media platform.

Even so, Ricky’s girlfriend makes appearances in Ricky’s Instagram posts quite often. Ricky enjoys spending time with his better half and refers to her as “Queen or my Queen.”

The pair often seem to spend quality time together from exploring various restaurants together to enjoying each other’s company in nature and in the beach.

Similarly, on the occasion of the birthday of his lady love, the pair went on a dinner date at Savoy Grill. Ricky shared the marvelous experience of taking his Queen to the Savoy for her Birthday on his Instagram.

Their lovey-dovey picture with sweet captions does hint that they might get married in the future and they would complement each other perfectly as husband and wife.

British actor Ricky was previously in a relationship with British singer and actress Jane Ewen. Ricky and the former member of the girl group Sugababes Jane began dating in 2009.

Being considered a compatible duo, Ricky and Jane were even close to announcing an engagement. However, they parted ways in September 2011, due to their busy schedule and work commitments.

Active in the entertainment industry since 2010, Ricky’s net worth is estimated to range in millions. While his exact income is under review many assume that his net worth ranges between $1 million to $5 million.

Although his acting career was not a smooth road, he has now started to appear in movies and series back again. Saying so, his character in EastEnders was dramatically killed in a car crash in 2015 after the webcam scandal. He was suspended from EastEnders for 2 months which led him to suffer from depression. Ricky later shared his deep depression journey due to the scandal in Celebrity Big Brother in 2016.