Sam Hauser is an American professional basketball player popular for playing for the Boston Celtics of the NBA. Known for his ability to hit the deep shot, Sam is playing as a small forward.

Sam has been grooming himself enough to compete and attain victory. Previously, he was a college basketball player for the Virginia Cavaliers and Marquette Golden Eagles.

The college basketball player turned NBA player Sam Hauser has been making a name for himself on the court. With the rising success as a basketball player, Sam’s personal life has created a curiosity among his fans.

Similarly, his dating life has been a topic of curiosity. If you are also wondering whether the Celtics star is dating anyone right now or not then we will be answering your questions.

Yes, the Boston Celtics player Sam Hauser is dating. The basketball player has been in a relationship with his girlfriend Mary Doge for quite some time now.

Sam’s girlfriend Mary is an American beach volleyball player. Reportedly, she is receiving her higher-level studies in Texas. As for her age, she is nineteen years old.

Sam and his lady love began dating in April 2017 and are in a long-distance relationship. 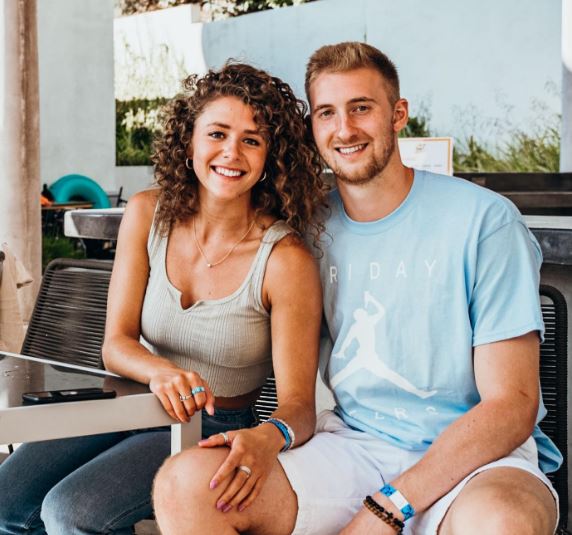 On April 23, 2018, Sam shared a picture with his partner-in-crime on Instagram and marked their 1st anniversary. Similarly, he has been sharing pictures with his lady love each year on their anniversary with sweet captions.

Not just Sam, his girlfriend Mary has also been giving insights into their relationship through Instagram. She has shared various pictures with her boyfriend writing how much she misses him.

Sam last shared a picture with Mary in March this year.

His parents’ names are Dave Hauser and Stephanie Hauser. His father Dave is an assistant basketball coach.

Sam Hauser, who started his professional career in 2021, is yet to touch new heights of success with his game and talent. Sam is currently under contract with the Boston Celtics and has been receiving a handsome salary as its team member. Reportedly, he is under contract for $619,498 and will make $1,563,518 in the next season.