Known as beloved Glenn Rhee on AMC’s The Walking Dead, Steven Yeun is a Korean-American actor who has earned critical acclaim and several accolades for his portrayals.

The recipient of various awards, Steven is also known for his work in I Origins (2014), Mayhem (2017), Okja (2017), and Sorry to Bother You (2018). He is also known for voice acting in Voltron: Legendary Defender, Trollhunters: Tales of Arcadia, and Stretch Armstrong and the Flex Fighters.

Who Is Steven Yeun’s Wife?

Actor Steven Yeun’s wife is Joana Pak. His wife Joana is a photographer by profession. Steven was in a dating relationship with Joana for seven years before they got married.

Steven got married to his longtime girlfriend, Joana Pak, in December 2016. The duo shared the vows in an intimate wedding ceremony at Los Angeles’ Paramour Estate with 220 guests in attendance. 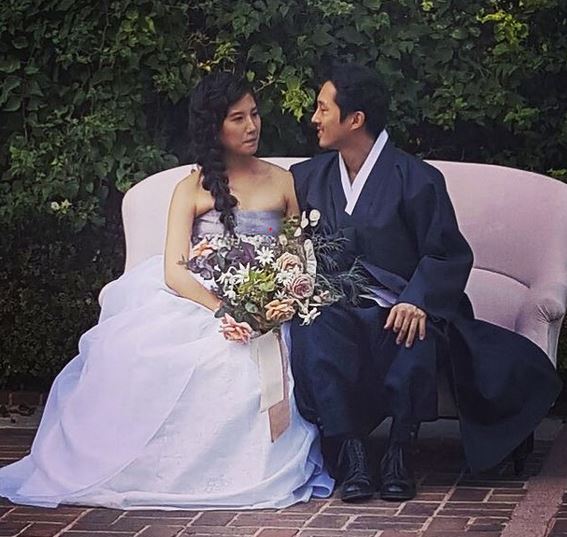 Blessed With Two Children With Wife!

A couple of months after tying the knot, the Walking Dead star welcomed his first child with his wife Joana. On 17 March 2017, Joana gave birth to a baby boy named Jude Malcolm Yeun.

After the arrival of their son in 2017, the couple was blessed with their second child in 2019. Joana, who first revealed that she was pregnant with their baby no 2 in December 2018, gave birth to a daughter.

The news of the arrival of the little bundle of joy came after Joanna shared a picture of her lying in a hospital with a newborn in a hospital bonnet. Their daughter, whose name hasn’t been revealed yet, was born on 28 April 2019.

Net Worth From Movies And TV Series

Active in the entertainment industry from 2004, Steven Yeun has successfully landed on various movies and TV series which has helped him to gather both fame and fortune.

Best known for portraying the character of Glenn Rhee in The Walking Dead, Steven has assembled a huge net worth from his acting career. As of March 2021, actor Steven Yeun’s net worth is estimated to be $4 million.