Landing a role in the Marvel Cinematic Universe is every actor's dream. But the American actress Lia McHugh lived that dream at a young age with the portrayal of Sprite in the 2021 Eternals.

Lia, who has been introduced as one of the youngest superheroes of MCU, has been active in her acting career since 2016 and has appeared in a handful of movies and television series.

Lia McHugh is an American actress born in the year 2006 in Pittsburgh, Pennsylvania. Her birthday is on November 18 and her zodiac sign is Scorpio.

She caught the bug of acting at a young age. During an interview with Junior High Los Angeles in November 2021, Lia recalled her childhood days. She was imaginative, doing crazy things and dressing up, and wanted to become a princess and a spy.

She was first discovered by a coach at the age of 7 in a performance and was approached for an audition. Her first-ever audition was for Antman’s daughter.

You May Like: Is Richard Madden Married Or Dating? Wife, Girlfriend, Net Worth

Lia started her acting career with the role of Jacey in the American paranormal drama anthology television series, A Hunting, in 2016. A year later, she appeared in Hot Summer Nights and Totem as Summer Bird Sister and Abby respectively.

In the year 2018, Lia appeared in the movie Along Came the Devil as Young Ashley and in American Woman as Jessica Nolan. The character of Jessica helped Lia exhibit her acting abilities for 11 episodes.

Lia appeared in the movie THe Lodge and TV series Into the Dark in 2019. She was then seen as Emma Griffins in the 2020 movie Songbird.

Most recently, Lia was seen in Eternals and will be seen in the upcoming American television horror thriller film, A House on the Bayou.

She has three brothers and a sister. Her older siblings are Flynn McHugh, Logan McHugh, and Shea McHugh and her younger sibling is Gavin McHugh. Her little brother Gavin was adopted.

Her younger brother, Gavin has appeared in the drama series 9-1-1 as Christopher Diaz.

Lia is a big family person- she loves spending time with her parents and siblings whenever free from her work. 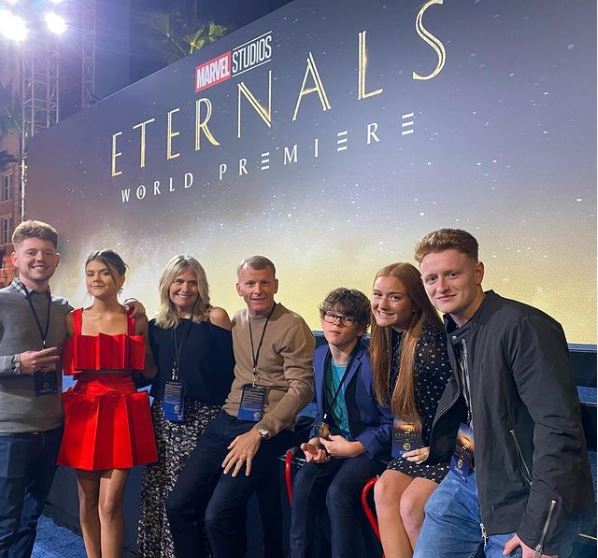 Her family has been her biggest support system. She has stated,

“I’m a big family person. I love being with my siblings. I have three brothers and a sister. They really keep me level-headed and humble and as “normal” as I can be. They make fun of me all the time. When I auditioned for Eternals my brother, Flynn, didn’t think that I was gonna get it. He was like, “There’s no way. That just doesn’t happen to people.” It’s funny.”

During the filming of Eternals, her siblings came to the set to visit her. They are also frequently seen on her Instagram handle.

Lia also has dogs in her family. They have three dogs and a bunny.

The Eternals star Lia McHugh is not dating as of November 2021. The 15 years old actress is single and doesn't have a boyfriend.

Lia has been featured on Variety’s Power of Young Hollywood list. She is making her way to success assembling both fame and fortune at the young age of 15.

She has come a long way from when she first started acting. According to her, the proudest moment as an actress for her has been the Eternals.

The success of the 2021 American superhero film has helped Lia garner international recognition. She also has amassed a huge fortune from her professional career.

The exact value of her net worth hasn’t been revealed yet. However, following the success of Eternals, her net worth is estimated to be in the range of $1 million to $3 million.