Richie Moriarty is a well-trained actor and comedian who was recently seen as Pete in the CBS sitcom Ghosts.

Richie has been professionally active in the entertainment industry for almost 2 decades as an actor, writer, and improviser.

Richie Moriarty is an American actor, comedian, writer, and voice artist based in New York City.

He is known for appearing in the teaser on CBS before kickoff of the AFC Championship game alongside John Malkovich, which won various Emmys and Clio awards.

Richie is originally from Rockville, Maryland. Talking about his education, he attended Boston College in 1998 and graduated with a Bachelor of Arts, Communications in 2002.

Before being active in the entertainment industry, Richie worked as a development associate in Discovering Justice (2005-2006), Special Projects Assistant in WGBH (December 2005 to July 2007).

In February of 2006, Richie started working at Improv Asylum as an actor, writer, and director. Meanwhile, he started Richie Moriarty Photography specializing in portraits, actor’s headshots, wedding photography, and more.

According to his LinkedIn profile, he has been active as an actor since 2004. He was a performer and writer at The Upright Citizens Brigade Theatre from November 2015 to March 2020.

Richie is a proud member of SAG-AFTRA since October 2013.

His work credit includes The Tick, Adam Ruins Everything, The Last O.G. What We Do In The Shadows, Unbreakable Kimmy Schmidt, House of Cards, and Orange Is The New Black, The Mysteries of Laura, Ghosts, and many more.

His birthdate is not known because of which his age is a mystery. However, he seems to be in his late 30s or in his early 40s.

Yes, Richie Moriarty is a married man. He has been relishing a blissful married life with Ciara Moriarty.

Richie and his beautiful wife Ciara got married in October 2016. The couple, who has been married for 5 years now, are parents to two children. 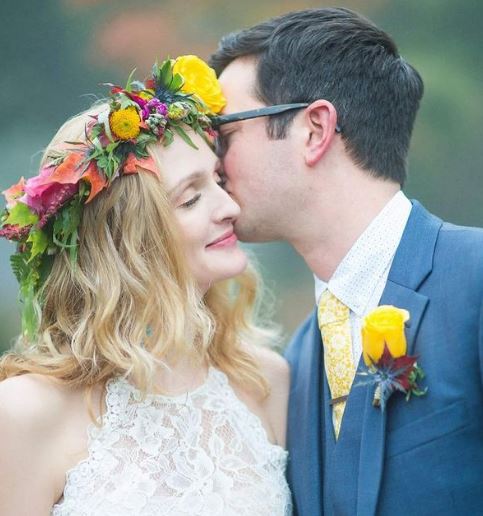 Ciara gave birth to their first child, a son named Delvin Lyons Moriarty in March 2018. They are also parents to a daughter named Loretta Hayes Moriarty.

Loretta was born in June 2021 and shares her birthday with her mother, Ciara. The news of her arrival was shared by Richie through his Instagram account.

Who Is Richie Moriarty’s Wife

Richie Moriarty’s wife Ciara Moriarty is also in the entertainment industry. According to IMDB, she is known for her work in Angel (1999), Cold Case (2003), and Zodiac (2007).

The husband and wife duo co-wrote and co-starred at UCBT in a show called Maybe Baby.

Ciara is also fundraising for the Epilepsy Foundation to help others who are living with much more debilitating symptoms.

She was diagnosed with epilepsy ten years ago.

Richie loves spending his time with his family and is never hesitant in expressing his love for them.

He is also close with his parents. His mother’s name is Patricia Lyons Moriarty.

Earlier this year on Mother’s Day, he shared his mom’s picture on Instagram and wished her stating,

‘Happy Mother’s Day, @pattymoriarty! No one is funnier, more generous or more full of love. So lucky you are my mom!’

He shares pictures with his parents on several occasions. However, his father’s name is still unknown. He also has a sister.

Richie Moriarty has been active in his professional career for quite a long time. He might have been receiving wonderful payrolls from his job. However, the exact value of his net worth hasn’t been revealed yet. Despite that, his net worth is estimated to be more than $1 million in 2021.